Posted on September 21, 2015 by ebindelglass 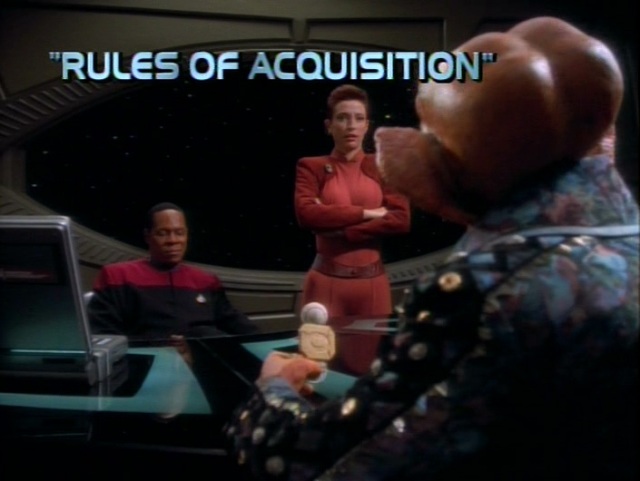 A female Ferengi disguises herself as a male in order to get a job at Quark’s.

Up to this point, we’ve heard a bit about how Ferengi women are not permitted to wear clothing. However, the true level of their subjugation isn’t seen until this episode, which marks the return of Grand Nagus Zek and the first appearance of a Ferengi female. I’ve described the Ferengi as being like organized crime. That’s when it comes to commerce. When it comes to women, they’re like the Saudis. In addition to forced nudity, Ferengi women are not allowed to work or get an education.

I find Ferengi-heavy episodes to be a bit trying. I love Wallace Shawn as an actor, but even Zek gets to be a bit much. That said, this episode is actually quite good. Star Trek has long been a piece of social commentary, in this case about gender equality. It exposes the Ferengi and makes you think. It even gives an extremely casual hint to acceptance of homosexuality when Dax is totally cool with Pel being in love with Quark before even finding out that he is actually a she.

The ending isn’t a happy one and that’s the way it should be. DS9 is, by its very nature, a little darker than a lot of previous Trek. More than that, however, is the fact that, for women such as those in Saudi Arabia, they don’t get a happy ending. Quark is a better man than Zek, but can’t take that extra step to accept a woman as he would a man. He wouldn’t be able to.

Here are some other things worth noting. The biggest thing is that this episode introduces the concept of the Dominion, of which the Karemma is apparently an important member. I think they’ll play a big part in things as the series progresses. The male Dosi, Inglatu, is played by Brian Thompson. Thompson played the recurring bounty hunter character on “The X-Files” and also played the Klingon first officer in the TNG episode “A Matter of Honor.” It looks like Pel is eating shumai in the replimat. The episode does, of course, make me think of the Barbra Streisand/Mandy Patinkin film “Yentl.” Finally, Dennis McCarthy’s score is quite good during the scene where Rom is rifling through Pel’s quarters.