No Trailers Before “Interstellar” In IMAX, But…

My ticket for “Interstellar” in IMAX

One of my best friends for the past 14-plus years and I have developed a tradition for our birthdays. One treats the other to a meal and a movie. Well, on Tuesday, we celebrated his birthday with “Interstellar” in IMAX 70MM film!

We ended up having lunch at Legend, a Chinese restaurant on West 72nd Street, because our standby – Ollie’s – was destroyed by fire last year. The main course I ordered was really spicy! 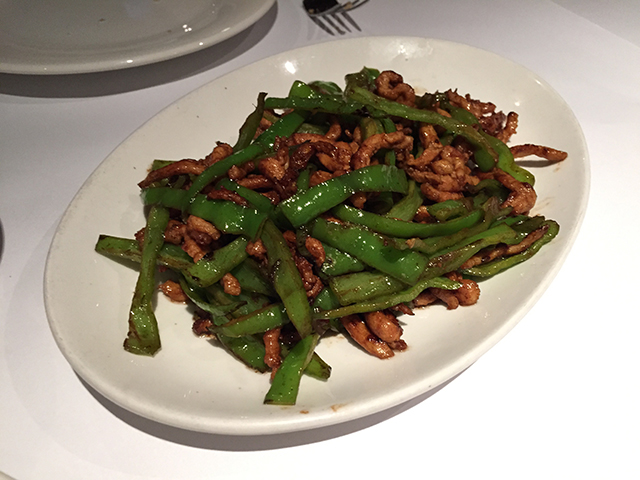 My Shredded Chicken with Spicy Pepper at Legend

Anyway, back to the movie…

We were in our seats at the AMC Loews Lincoln Square 13 (home to the country’s largest real IMAX screen) about 10 minutes before the 2:00 p.m. showtime. We love that there is now reserved seating at the IMAX because that means we don’t have to get there super early to get good seats. My friend wonders if some showings no longer sell out because people can’t get the best seats. Food for thought.

We were in our seats, chatting away, when Brian noticed that it was 2:04. No trailers. Nothing. About five minutes later, an AMC employee walked to the front of the theater and got our attention. He informed us that the movie, which clocks in at two hours and 49 minutes, was too long for the IMAX system to accommodate trailers and that the movie would begin in about five minutes. If memory serves, in the early days of feature films being shown in IMAX, some of them had to be edited down to fit.

While the movie would start at about the same time it would with trailers (about 15 minutes after showtime), if the theater won’t be showing trailers, they should really start the movie at showtime. What I’d really like is if movies were like concerts or other shows, where you get a time the show starts and a time doors open. So, you’d be told that the movie starts at 2:00 p.m. and that the trailers start at 1:45.

All of that makes me think of an article about lateness that’s been going around lately. The article on the site Firebrand is called “No, you are not ‘running late’, you are rude and selfish.” It bemoans how, as a society, being late has become accepted. It’s apparently an international situation, as the author lives in Australia. We’re all going to be late sometimes. There are situations that do go beyond our control. But being late shouldn’t be the norm. When my friend noticed that it was 2:04, people were still filing in because they figured the trailers would still be going.

That brings me back to my idea for listing the actual time the movie will start. If people have reserved seats, like this IMAX, they’ll probably arrive after the trailers start (negating them), but if it’s a regular showing with open seating, they’ll probably still arrive to see all of the trailers because they want good seats. Just an idea.

I didn’t mind not having trailers. Usually, I’ve already seen most of the trailers and half of them are usually for movies I have no interest in seeing. In fact, when a movie looks particularly bad, I usually say “No, thank you” out loud. Five minutes after the AMC employee told us there would be no trailers, he returned to lead us in a 10-second countdown to the beginning of the movie. That meant no blue numbers!!! Louis C.K. isn’t the only one who loves the blue numbers. I love the blue numbers. They’re so cool and really set the tone for the film. Also, if you haven’t seen Louis C.K.’s appearance on Jerry Seinfeld’s “Comedians in Cars Getting Coffee,” do yourself a favor and watch it. It’s one of the best in the series.

As for “Interstellar” itself, this was actually my second time seeing it. I attended an advance screening last Monday (11/3), but that was not in IMAX and this friend was unable to join me. But I knew he was excited to see it and I wanted to see it in IMAX. So, I made it his birthday present. Anyway, I now have four directors on my must-see list. That is to say that I have to see every new movie they direct. They are, in no particular order, Steven Spielberg, James Cameron, Wes Anderson, and Christopher Nolan. They each have different standout qualities. For Nolan, it is that his films are overpoweringly immersive experiences. I felt that, with “Interstellar,” he once again created a work of cinema that grabs you and does not let go. I urge you to see it on the big screen, in IMAX 70MM if possible (in the NYC area, that’s Lincoln Square or West Nyack). I don’t want to spoil it for you, but the less you look up about the film before seeing it, the better it will be for you. That’s usually true, but there is something really specific here!

I’m a huge film score enthusiast and, admittedly, usually quite quick to jump on composer Hans Zimmer. Here, however, I thought he knocked it out of the park. His choice of organ as the featured instrument is unusual and, like Nolan, intense. This isn’t a score with the sweeping romantic beauty of Jerry Goldsmith’s “Star Trek: The Motion Picture,” but I loved it. There are some super creepy parts of the movie and Zimmer accentuated them with his score. I may purchase it when it is released next week.